Note: direct link to the exact post not available–you’ll have to scroll down farther and farther each day on the link above to see it. 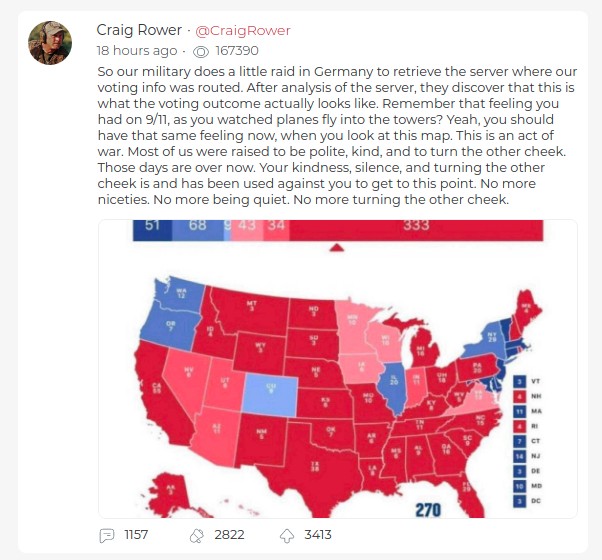 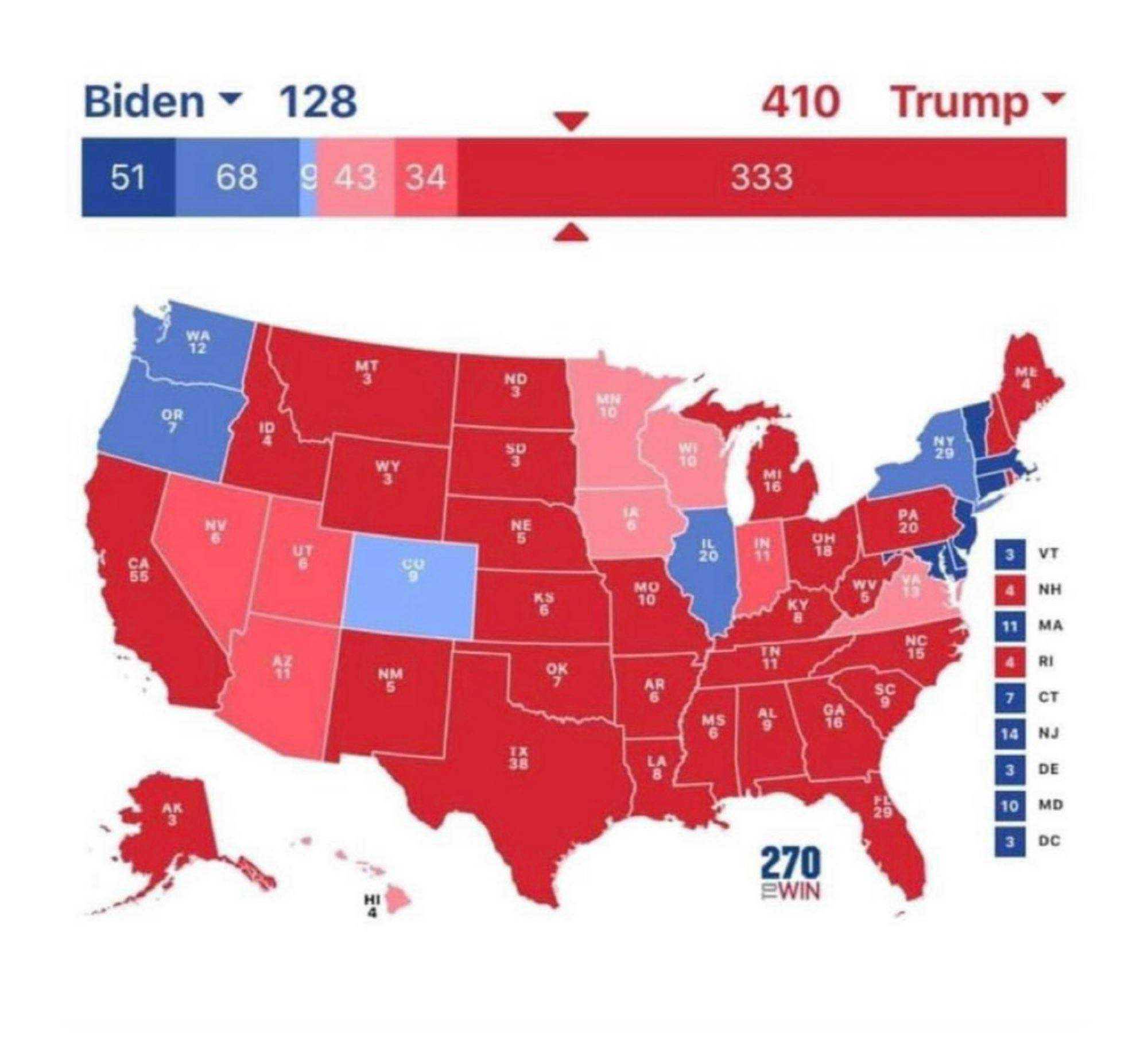 The accompanying statement, by Craig Rower, apparently a “former city councilman and mayor,” as stated at the top of his posts page here, says (emphasis added):

So our military does a little raid in Germany to retrieve the server where our voting info was routed. After analysis of the server, they discover that this is what the voting outcome actually looks like. Remember that feeling you had on 9/11, as you watched planes fly into the towers? Yeah, you should have that same feeling now, when you look at this map. This is an act of war. Most of us were raised to be polite, kind, and to turn the other cheek. Those days are over now. Your kindness, silence, and turning the other cheek is and has been used against you to get to this point. No more niceties. No more being quiet. No more turning the other cheek.

insane! I wonder what the validity is on this???? Can’t wait for court!!!…this is interesting!!!

this honestly is what I’d expect after seeing the insane support the President has. I pray that this is true! I did hear about Germany today but hadn’t seen that map.

So, seeing people rallying behind Trump based on false maps like this is alarming. I have to comment. This is dangerous ground to be spreading these types of things. No, this map isn’t true. No, that’s not a map of the true results. To understand what is happening today, you need to understand who President Trump is.

On 6 Nov. 2012, when Obama was elected, Trump claimed fraud in the election and tweeted here (emphasis added):

This election is a total sham and a travesty. We are not a democracy!”

This election is a total sham and a travesty. We are not a democracy!

We can’t let this happen. We should march on Washington and stop this travesty. Our nation is totally divided!

We can't let this happen. We should march on Washington and stop this travesty. Our nation is totally divided!

In 2016, when running for president himself, he again claimed the elections were fraudulent and rigged, when he said here on 16 Apr. 2016 (emphasis added):

I will be interviewed on @foxandfriends at 9:00 A.M. I will be talking about the rigged and boss controlled Republican primaries!

I will be interviewed on @foxandfriends at 9:00 A.M. I will be talking about the rigged and boss controlled Republican primaries!

Do you think Crooked Hillary will finally close the deal? If she can’t win Kentucky, she should drop out of race. System rigged!

Do you think Crooked Hillary will finally close the deal? If she can't win Kentucky, she should drop out of race. System rigged!

Crooked Hillary can’t even close the deal with Bernie - and the Dems have it rigged in favor of Hillary. Four more years of this? No way!

Crooked Hillary can't even close the deal with Bernie - and the Dems have it rigged in favor of Hillary. Four more years of this? No way!

He made many other claims in 2016 that the system was rigged. He then continued claiming election results were rigged for years, and just before the 2020 election he ramped up his efforts, told his supporters not to vote by mail, and said all mail-in voting would be fraudulent and the election rigged.

He has also been saying for years he will not accept election results in which he loses. Case and point: from Oct. 20, 2016 (watch it on YouTube here):

Ladies and gentlemen, I wanna make a major announcement today. I would like to promise and pledge, to all of my voters and supporters, and to all of the people of the United States, that I will totally accept the results of this great and historic presidential election IF I WIN!” 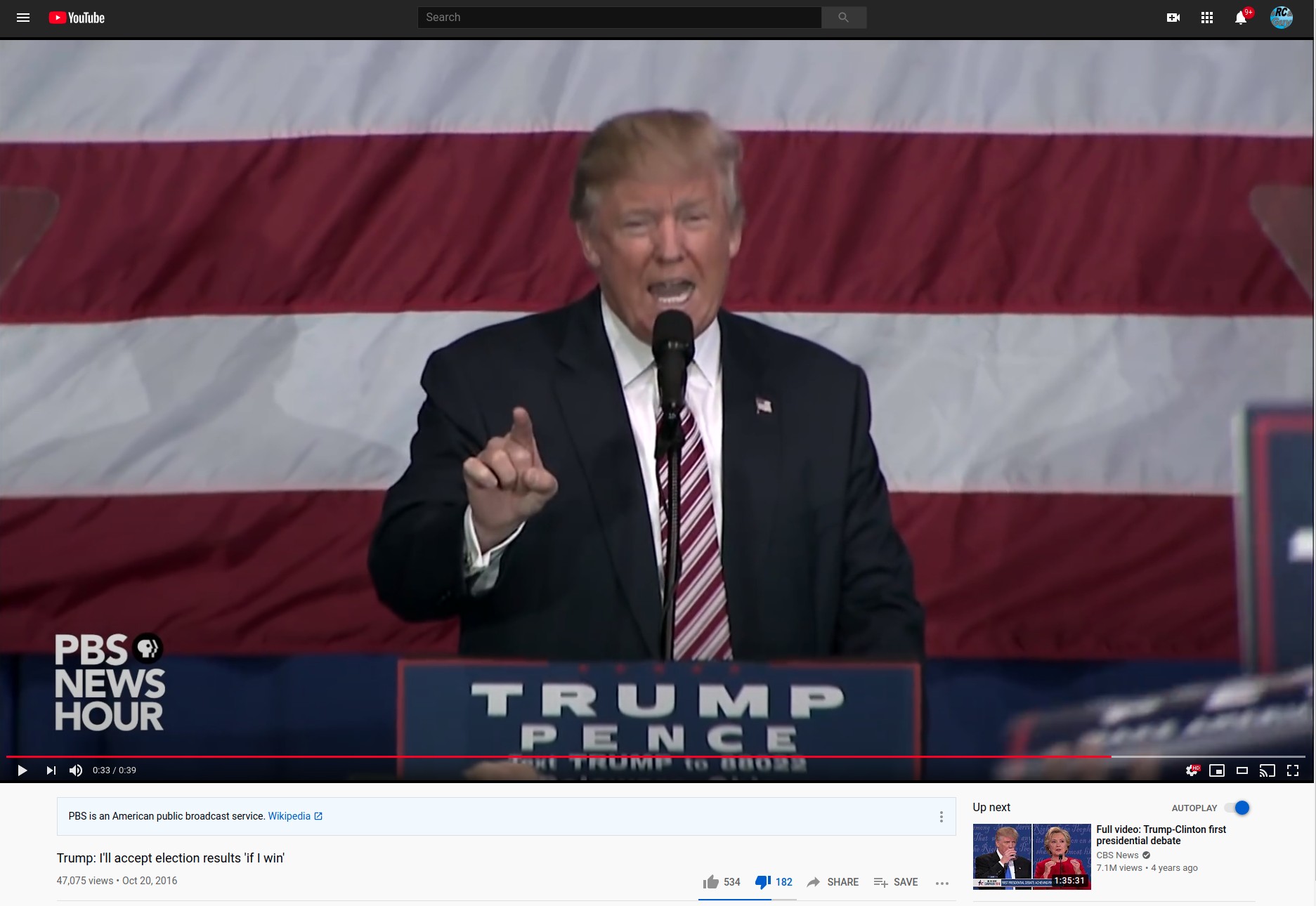 Now, in 2020 he is repeating his claims, this time crying louder and louder and LOUDER because this time he lost. He is the type of man who will say anything if he loses. He has been planting seeds of doubt in democracy and the election process in preparation for the moment that he might lose, so that he could fall back on claims of fraud and stir the nation to anger in an attempt to grab power outside of the normal means of our democratic system of government. This is the type of man he is.

Other men in history have sought power this way. They have deceived many. Many wars have been started by men like this. Many souls have been lost both temporally and spiritually by following men like this. Please do not be deceived by this man today, nor by his faithful followers who will follow him into any pit he has dug, and who will create false maps as shown above.

What inspired the statement accompanying this map?

It appears that the inspiration for this map comes from Representative (Republican, Texas) Louie Gohmert’s speech here, where he says:

…somebody ordered the US Army–according to the Tweet–uh, to go in and seize the server…